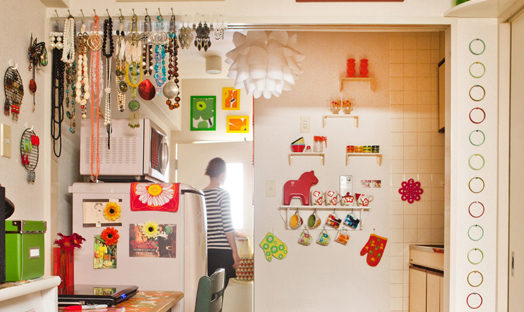 Japan is the land of creative storage techniques and organizing ideas. The average Tokyo resident has less than 1,000 square feet of living area and have had to learn to live with less stuff in their lives. Japan is also vulnerable to lots of earthquake shaking so not only do they have to own less stuff, it also has to be organized and stored securely.

Last summer, one of our Stow Simple Team members had the opportunity to travel to Japan and take notes on clever storage techniques and gathered several organizing ideas that could be utilized in Miami’s tight condo spaces. Here are four tips we should all be using right now.

Japanese homes really use lots of long, narrow pull out drawers in as many spaces as possible, especially kitchens where counter spaces are limited. They are awesome.  Use them.

Photo by LiB contents.
Look up!  Don’t forget about all the unused space in top cabinets or up on your walls, especially in the kitchen. Many Tokyo apartments have pull down cabinets to maximize kitchen storage. Although, not all are as cool as this one:

If you have ever been to Japan, you have probably dived into a 100 yen store (sort of like a dollar store on crack.)  You can pick up just about any kind of household item for organizing. There a wide variety of plastic bins with handles to help organize items together in cramped spaces and cut down on disaster zones of clutter. If you live in any major city in the US with a notable Japanese community (LA, San Francisco, Seattle, New York– you’ll find a Daiso that carries these items).

3. Organizing ideas that show off quirkiness

Sometimes we just don’t have a place for everything so some Japanese display stuff with quirkiness. Have fun and be lighthearted and showcase it in a neat way.

Don’t forget about textiles when organizing.  They give small spaces movement. In Japan, the changes of seasons are celebrated more prominently than in the US. Residents and business owners change their “norens” in their homes from season to season. These rectangular pieces of fabric with one ore more vertical slits are hung in doorways or windows. Sometimes they are used to divide the space between cooking areas and dining areas. For example, a breezy linen cloth with bright flowers can be used in the summer to make people “feel cooler” with the visual cues of summertime themes.

They can also be used to give a small room a feeling of flow and movement, especially if they are made of linen or hemp.

Our Stow Simple friend, Kim Hyacynthe, recently moved to Tokyo to start business school and shared her short tour of her tiny apartment with our team. You can get a sense for the lack of space and we are looking forward to her new tours after she gets fully moved in and organized!